Mechanism of Gene therapy http://geneandcells.com/what-is-gene-therapy/  replaces defective or undesired genes in the body with “normal” genes. A vector is re-engineered for delivering the gene to a target cell. Then the gene is transferred to the cell’s nucleus and must be activated in order to function. The gene must be integrated into the cell’s genome in order to function and be replicated. Since the vector may be detected as a foreign substance by the body’s immune system, side effects are possible. Gene therapy may occur either in vivo or in vitro, the transfer may take place either in somatic or germline cells, and a variety of viral and non-viral vectors may be used. 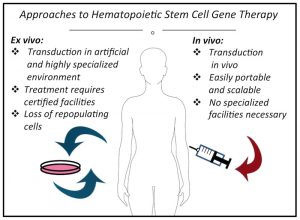 Apart from the approach, gene therapy procedures can vary according to biological components which deliver the desired gene into the patient (Smith, 2003).These biological components, or vectors, are classified into the broad viral and non-viral.  Liposomes and naked DNA are instances of common non-viral vectors. Liposomes are spheres of a lipid bilayer that envelope a transgene, interacting with the host cell allowing for endocytosis of the exogenous genes. Naked DNA directly injects the transgene into the tissues for uptake and expression (Smith, 2003).

While viral vectors can potentially lead to more severe toxic consequences due to the insertion of viral components into the host, they can be changed to remove their pathogenic properties to make safe vectors. The transgene that will repair the genetic abnormality in the patient is engineered to replace the pathogenic portion of the virus, and when the host cells are infected with the virus, the transgene will be introduced into the host (Somia and Verma, 2000).