Genetics is the scientific study of inherited variation. Human genetics basically  represents the scientific study of inherited human variation. As a matter of fact, human genetic research found that no two humans are genetically identical. Even monozygotic twins that develop from one zygote have infrequent genetic differences that are the result of mutations during development and gene copy-number variation.

Similar to us, our parents each have two copies of their chromosomes that get them from their parents. As sperm and eggs are created, pairs of chromosomes separate independently and match themselves randomly into two eggs cells in our mother or two sperm cells in our father.  We might get one chromosome in one pair from our mom, and our sister might get the other chromosome from that pair. This indicates why there are 8,388,608 possible variations of egg and sperm.  It’s indeed a wonder we look like our parents at all!

However, it is noteworthy to note that differences among individuals and even between closely related individuals are the keys to techniques like genetic fingerprinting. 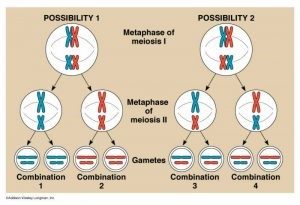 Additionally, there may be multiple variants of each gene in the human population (alleles), a situation called polymorphism. Alleles are created at various frequencies in different human populations. As well, genetic diversity can be influenced by a range of factors including population size, natural selection, mutation rates, gene flow between populations, introgression from hybridization and historical effects on these factors (e.g., population bottlenecks).Further, genetic diversity is predicted to be low in the terrestrial environment, and the reason is that island endemic species usually have small populations and thus low genetic diversity as genetic variation is increasingly lost through genetic drift.