History : At approximately noon, on Sep. 14th,1990 history was made when a billion gene altered cells dripped  into a vein of 4 year old girl named Ashanti. She had an inherited immune deficiency and so she couldn’t withstand microbial infection. Now, she is provided with the army of cells that bear  the genes she lacked. Through infusion of cells,  the first research federally approved use of gene therapy in a patient and by administrating the cells, medical practitioners took the first tentative steps into a new field of DNA technology.

Genes as the basic physical and functional units of heredity include specific sequences of bases which encode instructions how to make proteins. When genes are changed and the encoded proteins be unable to carry out their normal functions, genetic disorders occur. Thus, gene therapy as an experimental technique uses genes to treat or prevent disease. In most of gene therapy studies, a normal gene is inserted into the genome to replace an abnormal gene that caused disease.  Also, a carrier called a vector must be used to deliver the therapeutic gene to the patient’s target cells. Currently, the most common type of vectors are viruses that have been genetically altered to carry normal human DNA. In the future, this technique may help doctors to treat mental or physical illness as an alternative to using drugs or surgery. Researchers are testing several approaches to gene therapy consisting: 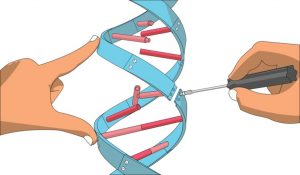 Though gene therapy is a promising treatment for many diseases like inherited disorders, some types of cancer, and certain viral infections, this technique is risky and is still under investigation to make sure it’s effectiveness and safety. The following risks are among disadvantages of gene therapy:

Unwanted immune system reaction. Your body’s immune system may find the newly introduced viruses as intruders and attack them. This may result in inflammation and even organ failure in severe cases.
Targeting the wrong cells. Since viruses can affect more than one type of cells, it’s possible that the altered viruses infect other cells — not just the targeted cells that have mutated genes. If this happens, healthy cells may be damaged, causing other illness or diseases, such as cancer.
Infection caused by the virus. It’s possible that once introduced into the body, the viruses may recover their original ability to cause disease.
Possibility of causing a tumor. If the new genes get inserted in the wrong place of your DNA, there is a chance that the insertion might form tumor.
Regarding the status of gene therapy, Asian countries were slower than their Western counterparts in the early exploratory stages. During the early 1990s, scientists of this region were busy duplicating what US investigators had done before, and industry didn’t pay enough attention to this newly emerging technology. Although, China, Japan, and Korea have emerged as strong contenders in the field of gene therapy from around the year 2000, the West has remained preoccupied with the death case and later the leukemia incidence. Though these cases deserved serious investigation, industrial and financial communities in the West appeared to have become ensnared in the safety issues resulting from the adenoviral death incidence and the retroviral insertional mutagenesis case. Thus, the West provided Asian countries with the opportunity to catch up. Encouraged by the completion of the human genome project and influenced by the successes of the information technology industry, these countries have been interested to explore the field of biotech and gene therapy as their favorite target areas.

Finally, as the example of these progresses, it can be referred to Japan where Sendai Virus was made as a gene delivery vehicle, and made the patriotic Japanese feel proud of themselves. Further, gene therapy has been aggressively promoted in China  at both governmental and industrial levels.