How Do Genes Work?

For many years, people have found that living things inherit traits from their parents. That common-sense observation led to agriculture, the purposeful breeding and cultivation of animals and plants for desirable characteristics. However, researchers did not understand exactly how traits were passed to the next generation until the middle of the 20th century.

Now it is clear that genes containing deoxyribonucleic acid (DNA)  carry our traits through generations . Genes , often known as the blueprint of life, tell each of your cells what to do and when to do it: be a muscle, make bone, carry nerve signals, and so on. Further, genes serve as instruction books for making functional molecules such as ribonucleic acid (RNA) and proteins which perform the chemical reactions in our bodies. 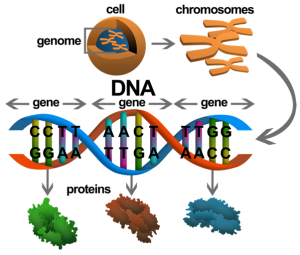 Also, Proteins do many other things. They provide the body’s main building materials, forming the cell’s architecture and structural components. But one thing proteins can’t do is make copies of themselves. When a cell needs more proteins, it uses the manufacturing instructions coded in DNA.

So, DNA code of a gene—the sequence of its individual DNA building blocks, labeled A (adenine), T (thymine), C (cytosine) and G (guanine) and collectively called nucleotides— spells out the exact order of a protein’s building blocks, amino acids.